MONROVIA, Liberia—The Free Presbyterian Church of North America (FPCNA) Mission Board announced Wednesday that they are raising funds to get at least one new missionary vehicle in Liberia, after repeated breakdowns on both their vehicles in the country.

Four years ago, the mission board purchased a 2007 Toyota RAV 4 in the USA, with a gift received from the Free Presbyterian Church of Northern Ireland, a sister denomination, and shipped it to Liberia to be used by Miss Joanne Greer, their full-time missionary there.

According to Miss Greer and Rev. David DiCanio, the other Free Presbyterian missionary serving in Liberia, the vehicle operated well initially, especially on the main roads; but it struggled off-road and has gradually started to break down, recently losing its transmission.

Mr. DiCanio drives a 2007 Nissan Hardbody Pickup truck that the board purchased in Liberia in May of 2013. Both missionaries now share that vehicle.

“The Nissan engine works well, but the body is falling apart,” Mr. DiCanio said. “We spend much of our time looking for parts and trying to keep it maintained.”

The Nissan was owned by a Liberian NGO (Non-governmental organization) and was sold to the board, through Mr. DiCanio, by a car dealer in Monrovia, Liberia. According to Mr. DiCanio, the Nissan had some structural problems that were not disclosed when they purchased it.

“It’s difficult shopping for used vehicles in Liberia,” Mr. DiCanio said. “Several vehicles we looked at had no VIN number plate on the dash board, and none had titles. We were concerned they had been stolen.”

Mr. DiCanio says he purchased the Nissan truck because the price was good, it had paperwork and had a visible VIN number. It was inspected and okayed by a local garage, but there were a number of problems they were not told about.

“I later found out the garage owner and salesman were friends,” Mr. DiCanio said. “So perhaps the inspectors were not telling the whole story.”

Miss Greer said that both vehicles have broken down at the most inopportune time, especially the RAV 4, the one she drives. It recently broke down in a bad section of town.

“There is no towing service, and it is sometimes difficult to get parts unless you have a specialized vehicle that is actually built for this part of the world,” Miss Greer said.

One of the options the mission board is considering for new vehicles is the Toyota Land Cruiser Hardtop.

According to the missionaries, most NGOs in Liberia use Toyota Land Cruiser Hardtops because of their rugged build, off-road features, and safety.

“They have double fuel filters to protect the engine from dirty fuel, a common problem in our part of the world,” Mr. DiCanio said. “They also have two fuel tanks for travel in rural areas which often lack filling stations. And, of course, parts are available.”

According to Mr. DiCanio, many Liberian NGOs purchase their Land Cruisers in Gibraltar (South of Spain) at a substantial discount through Toyota Gibraltar Stockholdings, Ltd. (TGS). 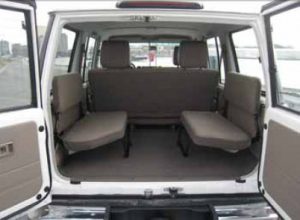 Toyota Motor Corporation in Japan set up TGS in 1996 as a stock operation for the United Nations and International Humanitarian Organizations (NGOs), with the idea of selling at a substantial discount to qualified buyers. With the help of Mr. DiCanio, the Free Presbyterian Church of North America mission board applied to TGS through Rev. Colin Mercer, the secretary of the board, to see if they would qualify.

After receiving the necessary paperwork, TGS approved the FPC work in Liberia because they were an NGO affiliated officially with the Free Presbyterian Church of North America. Unaffiliated local NGOs in Liberia cannot receive approval, according to TGS’s USA office.

“We saw that the identical vehicle was over $60,000 USD in Liberia four years ago, but TGS was selling the same vehicle for just over $31,000 USD, including shipping to Liberia,” Mr. Mercer said. “But we would need to pay import duty on top of that price.”

According to a customs officer at the duty-free department of the Liberia Revenue Authority, the Liberian government is no longer granting duty-free status to non profit NGOs for vehicles unless the NGO is directly involved in education or medical work, which the Free Presbyterian mission is not.

“There would also be a $2000 to $2500 USD receiving fee at Freeport, in Monrovia, and potential storage fees at the port if officials purposely slow the process,” Mr. DiCanio said. “So we are talking $38,540 for a total price if all goes smoothly.”

Through Mr. DiCanio the mission board has priced the vehicle at several Liberian dealers who have recently lowered prices in what seems to be an awareness of the competition from Gibraltar.

“We have gotten official quotes from $43,150 to $50,000 from the three dealers in town,” Mr. DiCanio said. “The lowest quote is not from an official dealer, and appears not to have the same warranty.”

The Land Cruiser has a 13-seat model that would help the missionaries transport a number of the children that come to Bible club from the Dwazon area where the missionaries live and the youth and women when they have their church functions. The price for the 13-seater is the same as the standard 10-seater—three in the front, three in the back, and four in the rear-facing seats.

“Safety is probably the biggest concern,” Miss Greer said. “We’ve often had to transport the youth in rented buses that were extremely unsafe, and I’ve often taken taxis myself that were completely falling to pieces and lacking seatbelts.”

“The taxi system here is very dangerous,” Mr. DiCanio said. “We’ve heard numerous unconfirmed reports that some drivers, with passengers, are merely posing to rob people, and crashes are frequent according to a study released by the Liberian government.

If funds are raised, the mission board would like to consider one new and one used vehicle, but their priority is to get at least one new vehicle for Miss Greer’s use.

If readers would like to donate toward a vehicle, they can send a gift to the following locations:

Funds must be marked “Liberia Vehicle Fund” in the memo field.